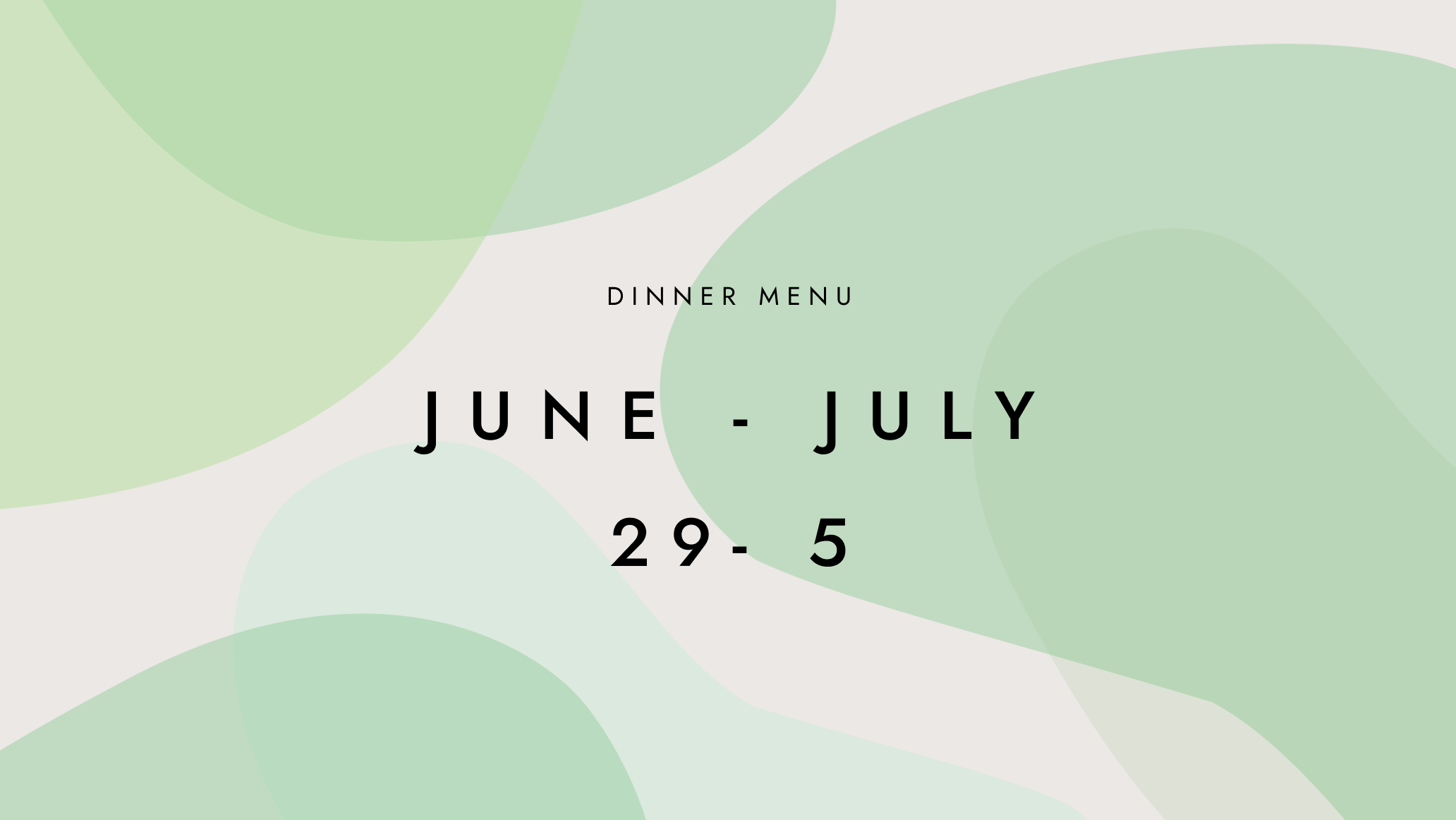 This past week was super hot in Berlin.  Our apartment reached nearly 90F (30C) most days and so cooking felt more like an exercise in not melting than a deeply satisfying endeavor.  These dinners likely represent this sentiment - from the Vietnamese summer rolls and the green beans appearing again, to the sweet corn succotash, which comes together quickly and easily.   Regardless of being low-effort, many meals this week felt like they were full of great surprises.  Jenné Claiborne has a wonderful vegan "sausage" recipe in her cookbook and also has a video about it.  If you love normal sausage and are looking for a vegan replacement, this is probably not going to hit the spot.  But if you're looking for something flavorful and delicious in its own right, this is a great option.  I had never made seitan with so many other ingredients mixed in, but it adds a lovely texture. I hope you enjoy these recipes as much as I have. 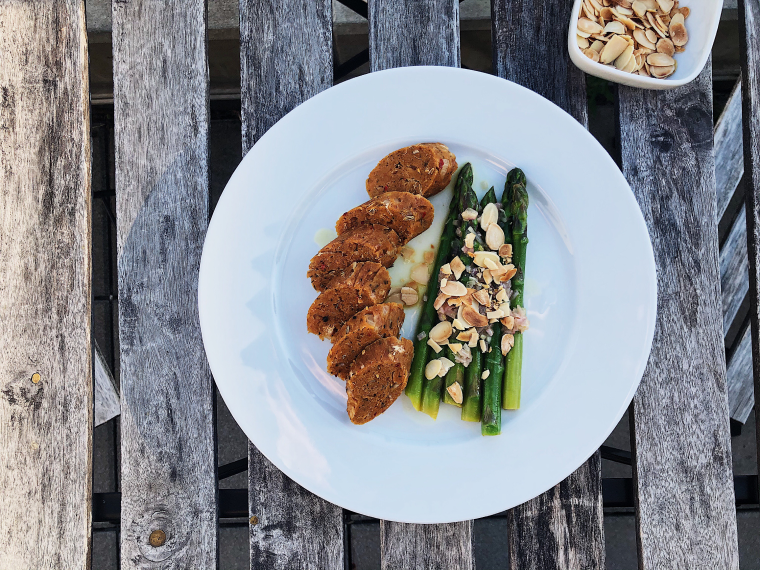 I was really curious to try Jenné Claiborne's vegan sausages but I didn't expect them to be THIS good. They're so good I messaged my closest friends and even my parents (Argentines who although are health conscious, aren't all about fake meats). The lemony asparagus dressing is a nice compliment to the more creamy and dense sausages.

The lemony asparagus dressing is a nice compliment to the more creamy and dense sausages. If you're looking for a meat replacement, this isn't your dish, but if you're simply looking for a delicious weeknight meal, this is a great option. I paired the sausage with a bit of an invented sauce. I've been into this idea of making a slightly heated dressing lately, so I pushed on that idea a bit while referencing a bit of a green beans amandine kind of dish. 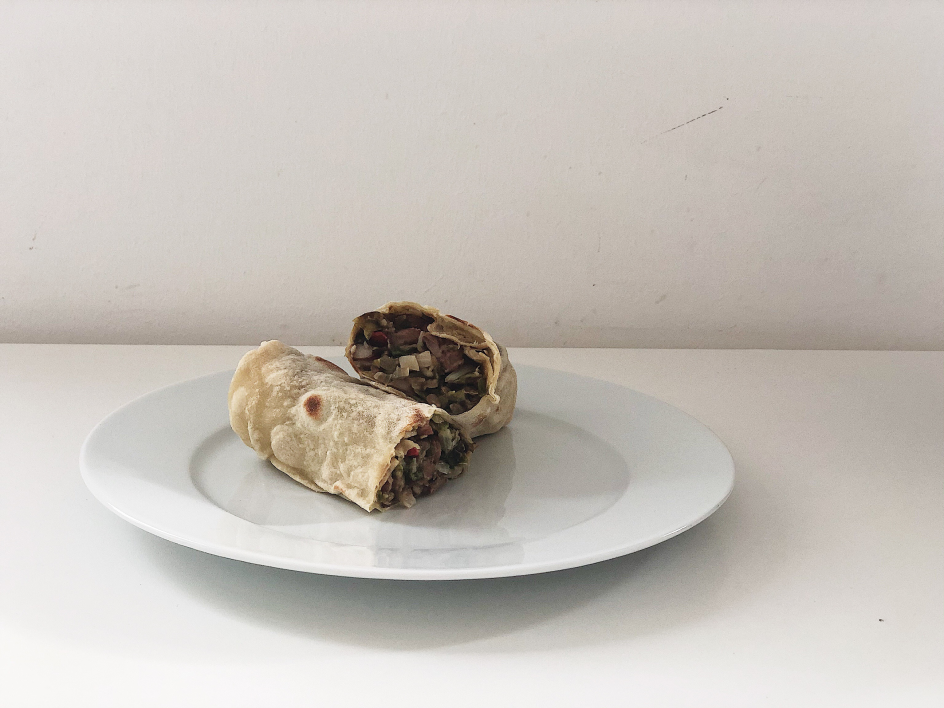 When I was younger and my family went on a trip to Mexico, my mother warned me that true Mexican food was nothing like what I was used to eating in Boston. She explicitly pointed out that there would be no burritos to be had. So I had created this idea that burritos were an American creation of sorts.

So when I met José and one of the first foods he said he missed from Mexico was in fact, a burrito, I was a bit taken aback. We got into talking and the burrito he described was a totally different food - soft wheat tortilla, rolled into a much thinner cigar-like shape with a meat and/or beans filling, some cheese, and dipping salsas, but not much else. Much like most foods brought to the United States, the burrito has taken an American hyphen into its name without us even realizing it.

Today's burrito was made both a bit in a hurry and a bit with what I could find at the supermarket. I saw the shishito peppers and they reminded me a little of the flavors of poblano peppers, so I picked some of those up. I grilled them on a grill pan, diced them up and mixed them with the onion and bean mixture. I had another food lesson at the table today - José explained that the filling in burritos needs to be a bit sticky and mushy - this allows it to adhere to itself and makes it a much easier "on-the-go" food. Today's burrito kept the veggies a little more intact, so if you've got time (or maybe a slow-cooker) feel free to let the mixture stew for a while. If you're in a rush like I was...it's still a tasty dinner.

You'll have two leftover tortillas which you can use to make quesadillas for lunch tomorrow. 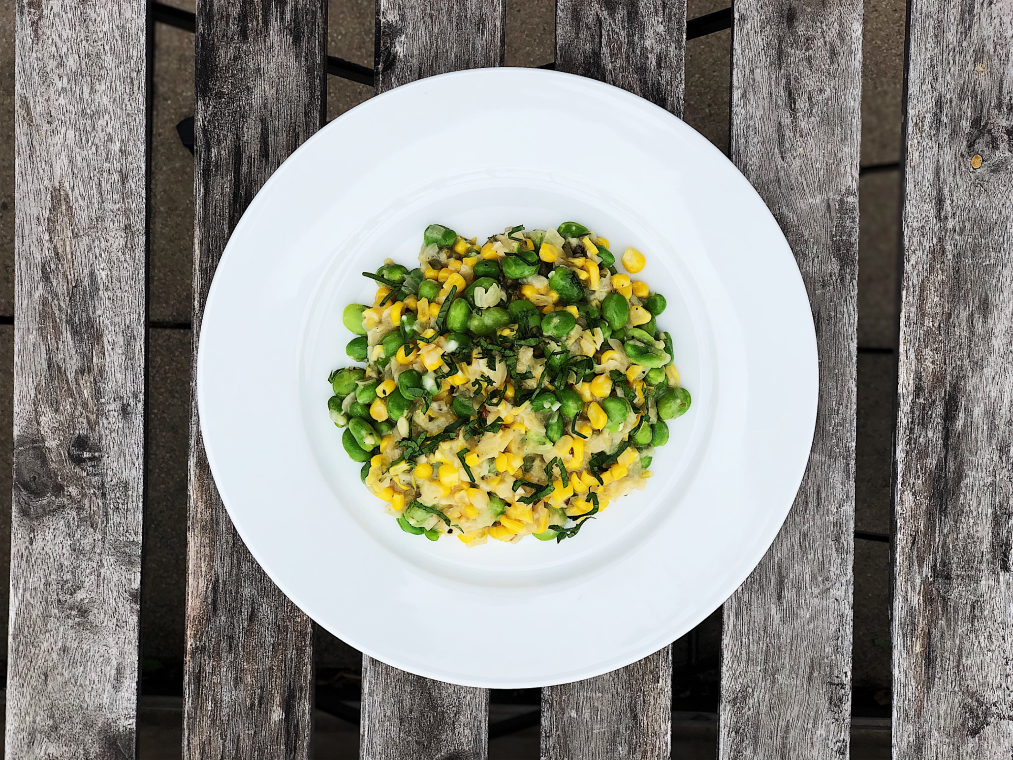 This recipe also originally comes from Jenné Caliborne's Sweet Potato Soul book. I made some minor adjustments so I can cook it with the ingredients we have easily in Berlin. Of course I had seen some beautiful broad beans the day before at the supermarket and when I went in to pick some up, they were gone. I went to the freezer section because I really had my heart set on this dish, and found some smaller frozen broad beans. I used those by defrosting them in a little water, and then peeled them to reveal the bright green smooth interiors. I know it's a bit of a cheat, but frozen veggies save the day sometimes.

I've had succotash in the past, but I think it was a bit of a scarring experience. I found the vegetables sadly overcooked and they ended up being more of a grey than a vibrant celebration of summer. After making this, I'm officially a major fan of succotash. The flavors in this recipe reminded me of Mexican esquites - although quite a bit lighter. 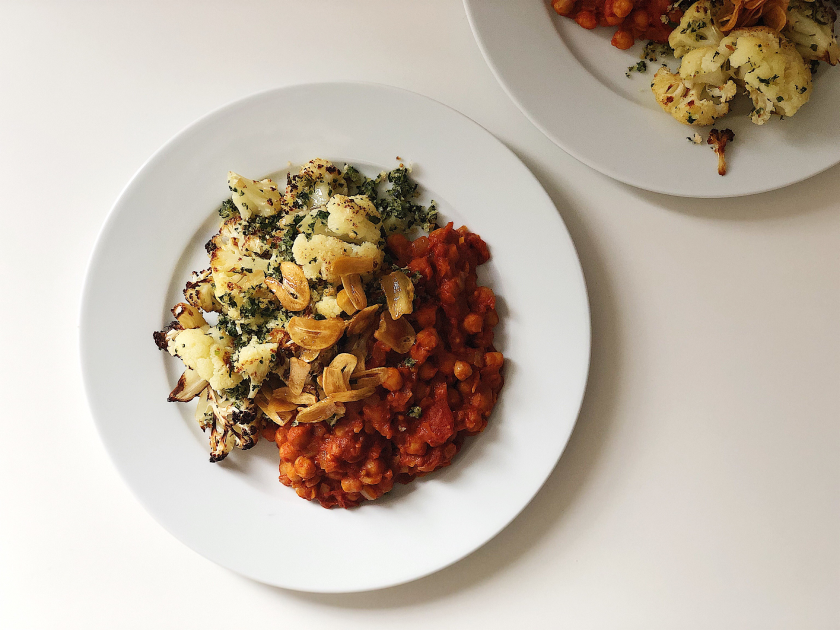 Bryant Terry's original recipe is much more refined than this one, so if you're on the lookout for a true date-night meal, he's your guy. I was a bit skeptical of this mixture of flavors all on one plate, but wow is this delicious. Of course I chose a swelteringly hot day to make it, which I'd urge against, but it was still magically delicious. 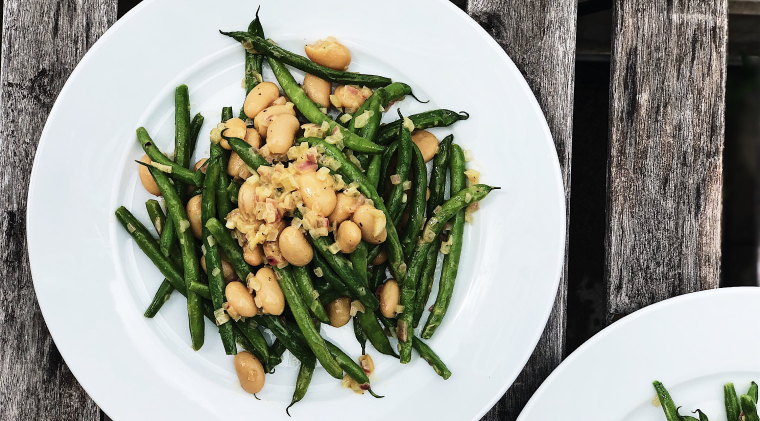 This green beans recipe is heavily inspired from Jenné Claiborne’s cookbook Sweet Potato Soul. I tried to keep the flavors of the dish, but added in some butter beans and cooked the dressing mixture. Sweet potato soul is incredible - not just because of Jenné's delicious recipes, but her writing feels so full of joy and enthusiasm for the food she cooks. Her storytelling is welcoming - both into her life and to veganism. If you’re looking to dabble with eating less animal products, you’ll want her cookbook in your kitchen. 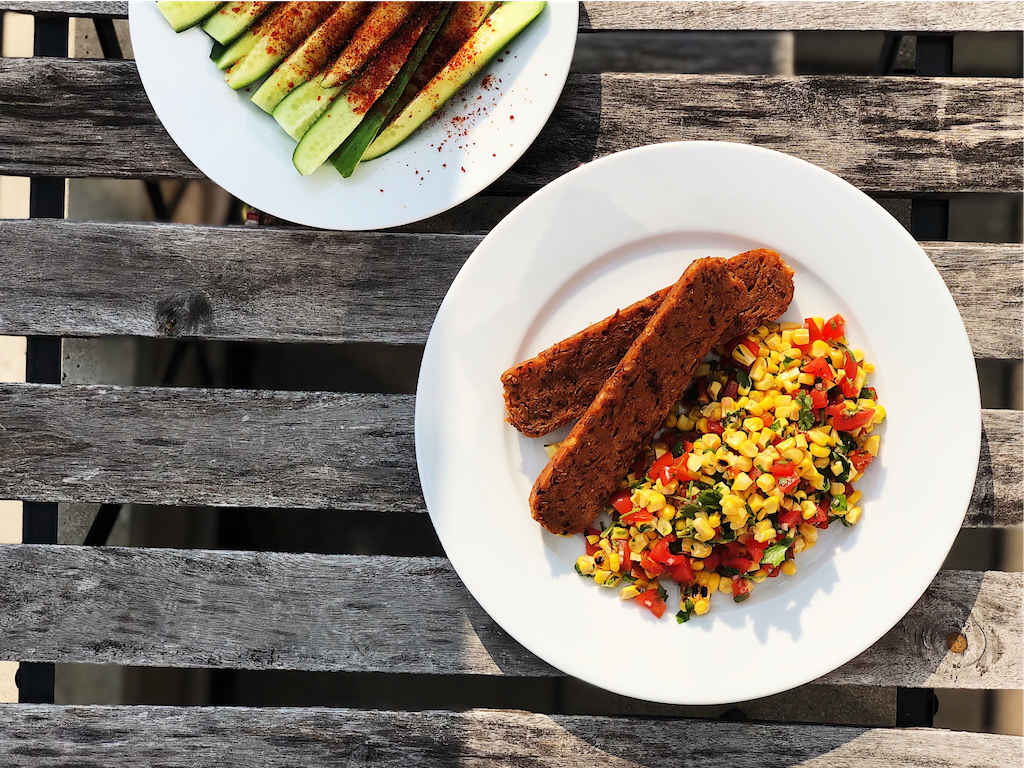 This sausage recipe is based on Jenné Caliborne's recipe but with a bit of a Mexican chorizo inspired flavor profile. It was a hot day and I needed something to use up leftovers, and something that would come together without heating the apartment too much. A while ago, José introduced me to putting tajín on various things like watermelon (mind blown) and cucumbers.

The citrus-notes and chile flakes together make a super savory accompaniment to the fresh cucumbers. I love this kind of corn salsa and the cucumbers with tajín are a super refreshing treat. Trader Joes also sells a lime/chile seasoning which is very similar to tajín or you could simply dust the cucumbers with salt, chile powder, and some lime juice to approximate the flavor. 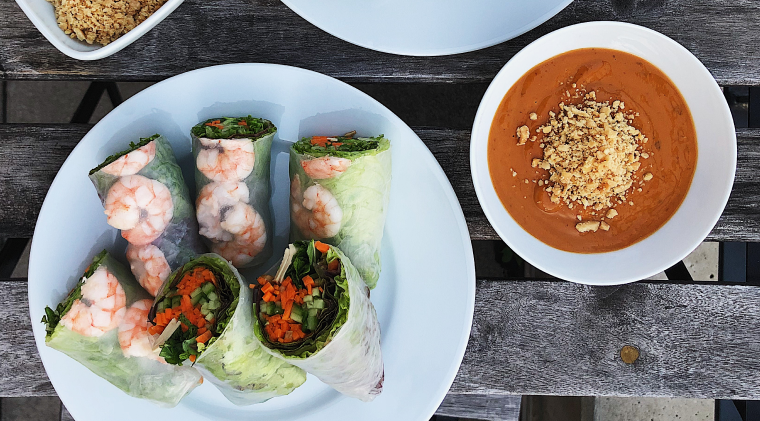 These are one of my favorite summer go-tos. They require nearly no cooking and the ingredients can be prepped ahead of time and put covered in the fridge. I can’t recall when I first had these rolls, but when I was little, my mom’s office was located in Boston’s Chinatown.

On the rare occasion like take-your-daughter-to-work-day, we’d go to this wonderful Vietnamese restaurant and have lunch there. The flavors of these rolls remind me of skipping school and spending time with my mother.

Episode 12: When it's just too hot but you've got to eat
Super hot summer nig

Episode 10: Food as nostalgia past and present
After a break for su
See More Weeks