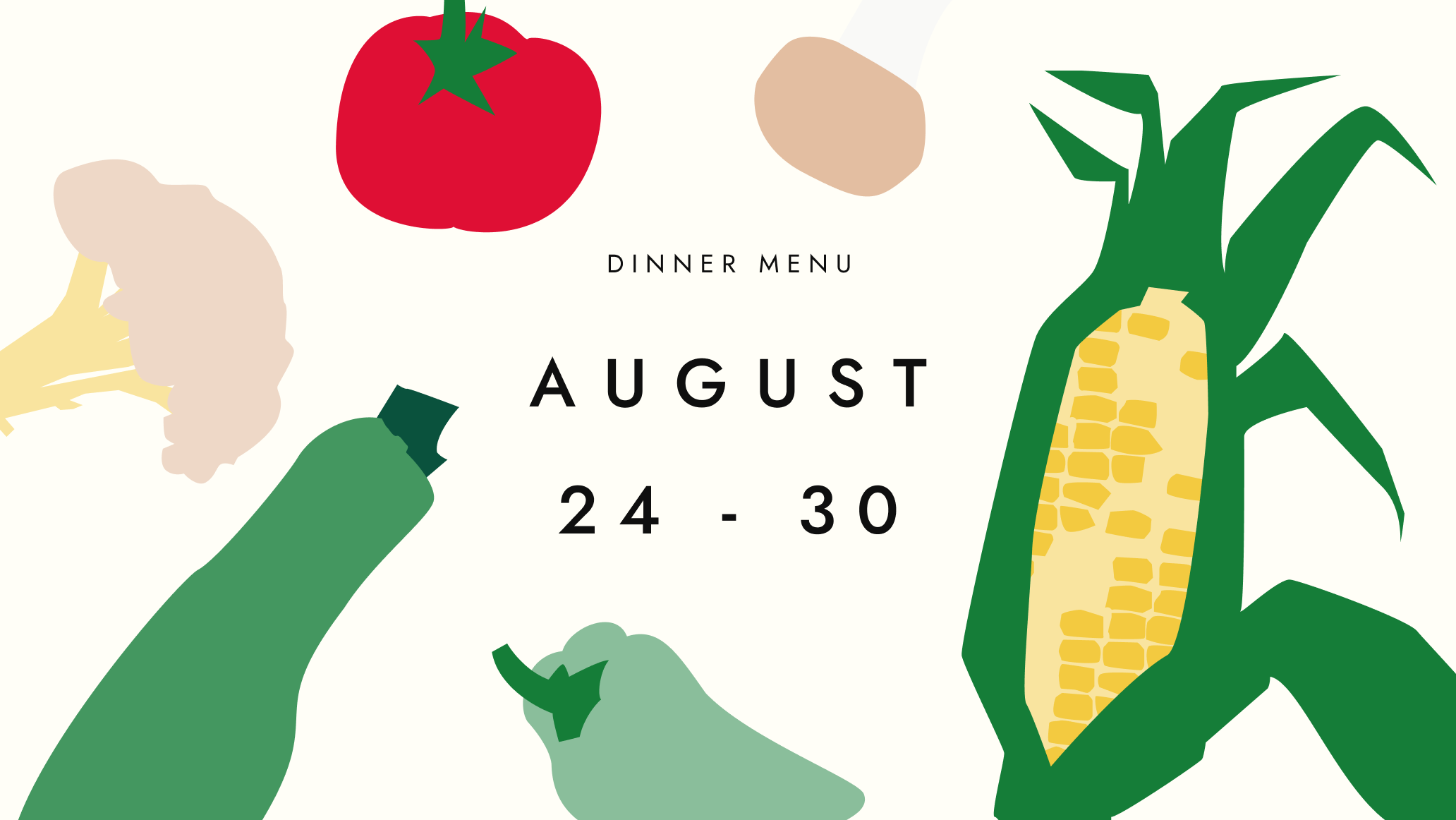 Episode 12: When it's just too hot but you've got to eat

This week has been hot. Like full on summer, wish I was jumping into a lake and not typing on the computer hot. Dinners this week certainly lean light and it's a reflection of the hot weather. I'll admit that after most dinners this week I followed them up with an iced herbal chai on the balcony as a final note to the evening.

You might also notice that the first three dinner recipes this week are new and the remainder are repeats...well I started the week off ambitiously but then just wanted to revert back to recipes I'm a little more familiar with. The heat makes me lazy, what can I say. 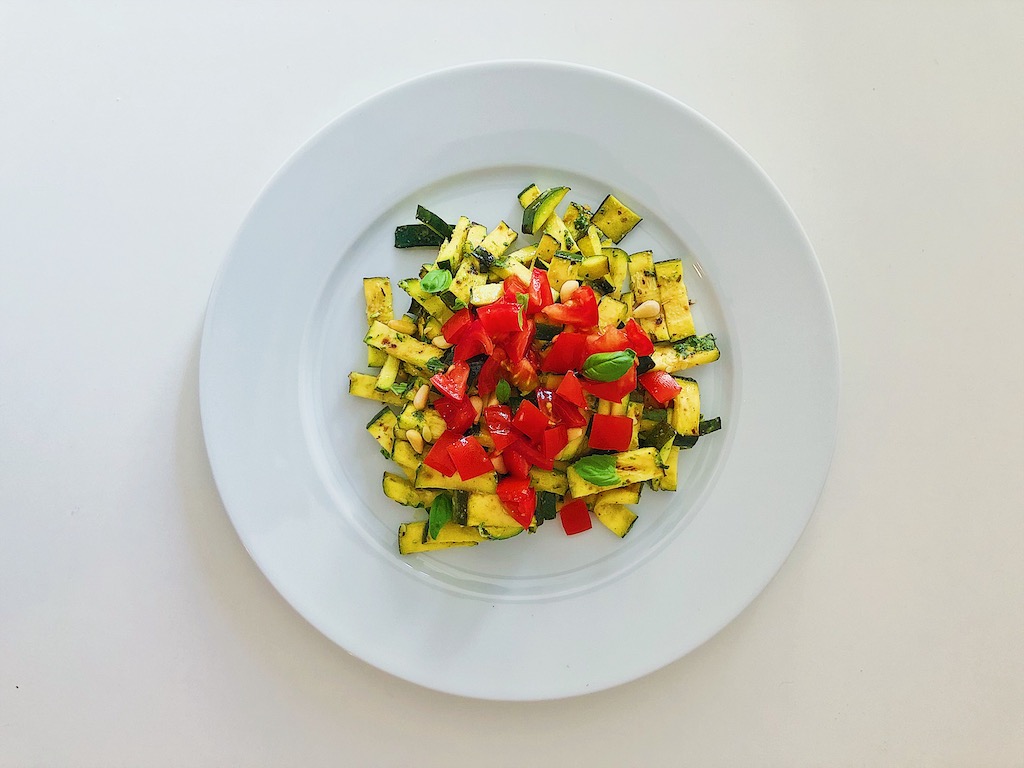 These instructions are based on using a mortar and pestle (mine is rather tiny and was very cheap and it works just fine) but you could absolutely hand chop this or put it in a blender or a small food processor. If you're curious about how these different methods result, Serious Eats has a really lovely article on the matter.

The addition of lemon zest comes from an Italian woman I met back in Boston named Sylvia. She had been visiting for some scientific work in the city and she swore the secret to making incredible pesto was to add a smidge of lemon zest...and so I've done just that ever since. I can't say she was wrong.

You'll make a little extra pesto than you'll need, but you can freeze any leftover in an ice cube tray - just use one you don't want to use for other purposes because it may take on the garlic flavors. 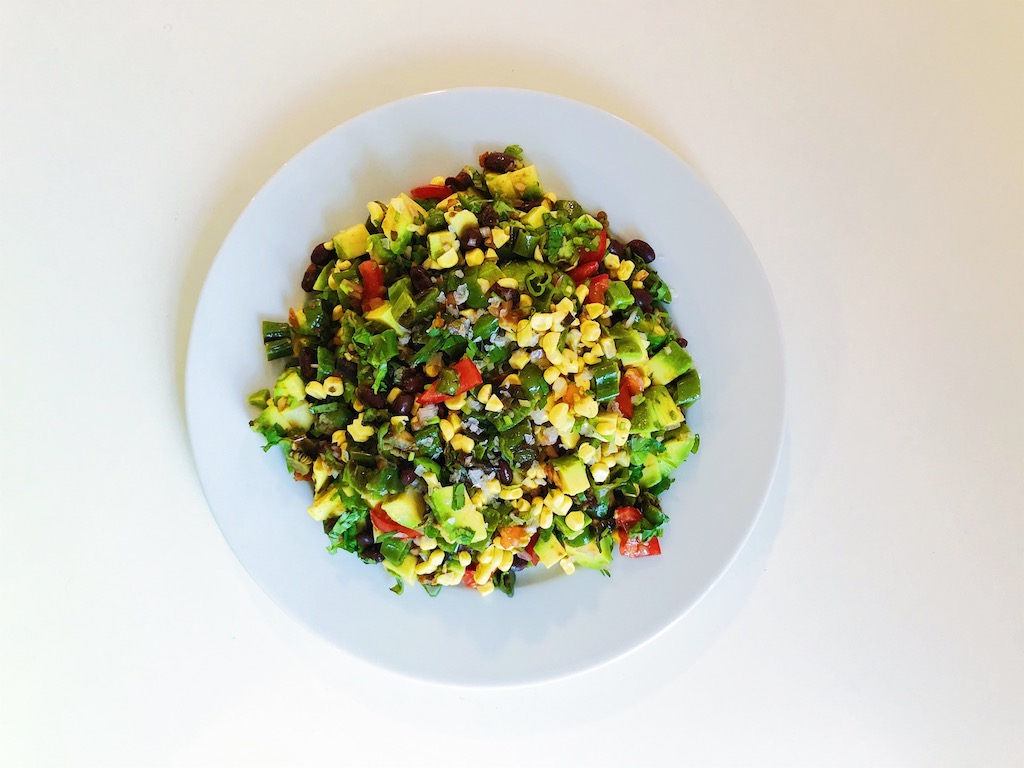 Last week one of my childhood friends sent me a picture of a black bean, corn, and tomato salad saying "I made your mom's salad". It had me longing to be back home at the dining table eating this refreshing summer salad with my mom. So even though I had a plan to make some tacos, I rerouted the endeavor to a rendition of my mom's salad mixed with some flavors that have become common-place in this Berlin home.

Do I still crave the simplicity of my mom's salad? Totally. This is just a different version of the same idea. 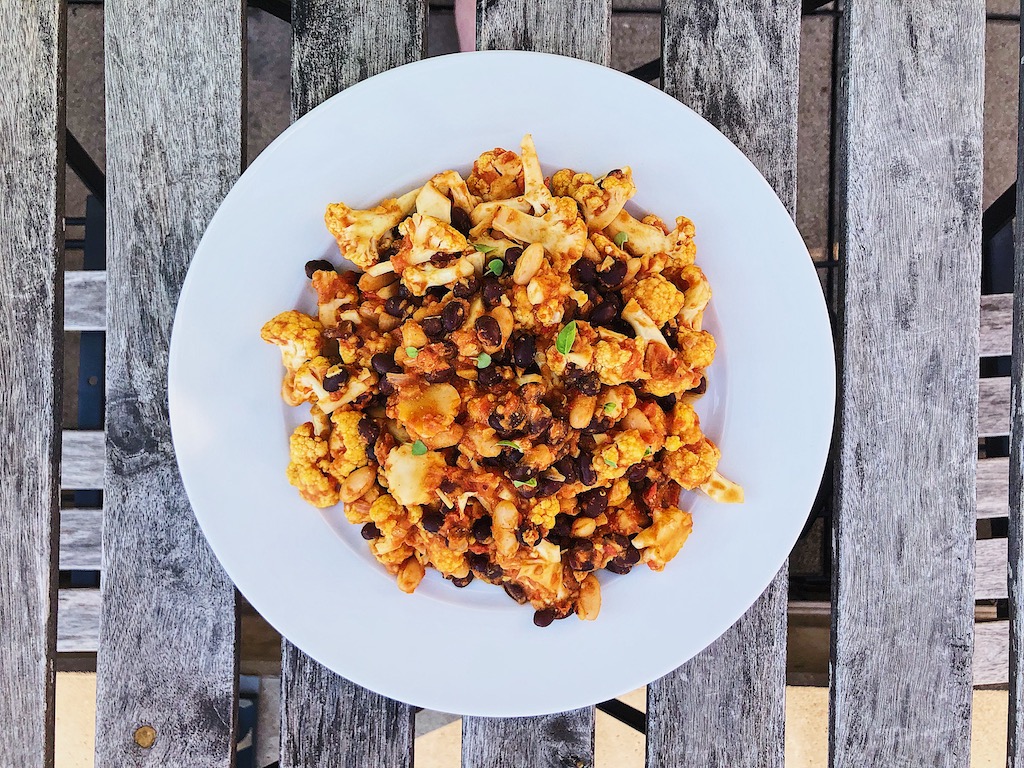 I've been reminiscing on a recipe from a few weeks ago from Bryant Terry's Vegetable Kingdom. That dinner was so tasty...but I had some leftover beans lying around, so I went to replace the chickpeas with beans mixto, and then kind of combined it all together into a one-pot kind of deal rather than roasting the cauliflower separately.

The reality is that I've found roasting in the oven is basically like saying I'd love a heaping pile of fresh lava in my living room during a heat wave. That means if I cook on the stovetop, the heat is a little more manageable. So this recipe is like the "hot weather" version of this dish. 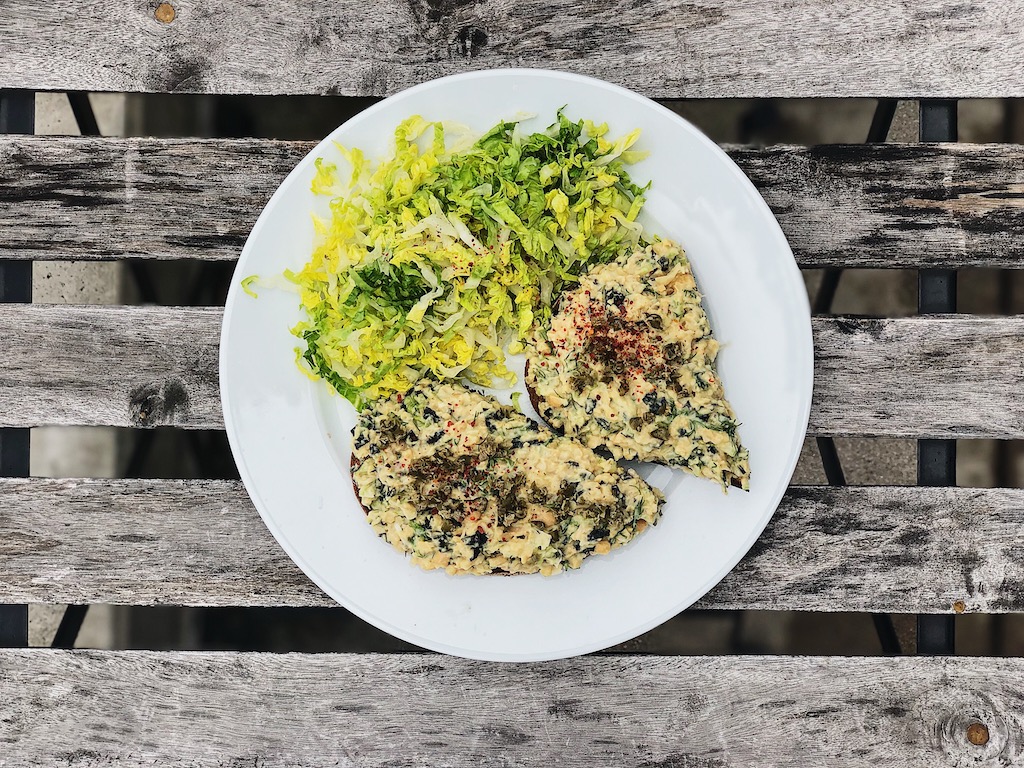 Chickpea salad open-faced sandwiches with a side salad

This recipe was originally inspired by Jenné Claiborne's Chickpea "Tuna" Salad. Growing up, I have fond memories of rainy days listening to the thunder while we'd eat open-faced tuna melts. The other day I made myself one for lunch and it had me thinking if it might be possible to make a vegan version of this comfort-food meal. I really loved Jenné's idea to use seesawed, something from the water, into this plant-based version.

I found that I really missed the briny flavor of tuna, so I added in some chopped capers, but you could just as easily use olives to add that salty tang.I also subbed coconut yogurt for mayo. This might be a personal thing, but my parents always subbed yogurt for mayo in tuna salad to make it a little lighter, so I did the same here. 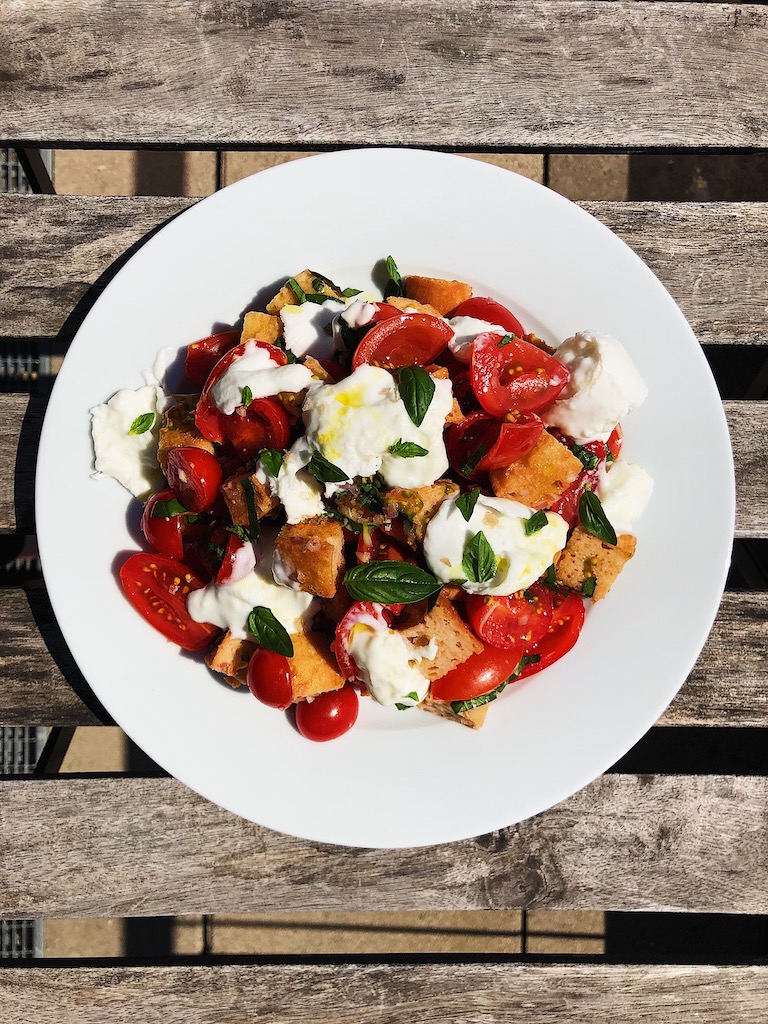 This week has had me deeply craving a cabin in the woods, or an escape to a lake my family would visit in New Hampshire during the summers when I was little. Memories of swimming to turtle rock, making paper out of things we found in the forrest, and baking hot pink cupcakes flash before me and I admit that my heart aches a little for summers like those.

But as memories evolve, I also recalled this galavant one of my close friends and I had through Italy many years back. On one of the afternoons between rushing from one place to another, with nearly no money left in our wallets, we stumbled on this little café and ordered the tomato soup (it was likely the cheapest thing on the menu). What came out was this rich tomato-y stew with a bread base and a pitcher of this incredibly spicy olive oil we were supposed to drizzle on top. The soup was studded with these big chunks of basil and honestly, even to this day we talk about how spectacular that soup was. This was also the first time in my life that I had tried olive oil that felt tannic and almost spicy and it changed the breadth of what olive oil meant to me.

At the start of my current vacation, I picked up a very fancy, and necessarily spicy, olive oil. With this ingredient on hand, I figured why not find a way to fold it into a fresh summer salad on such a hot and sunny day. I've landed on something between a classic Tuscan panzanella and a caprese salad. If you have super fancy tomatoes, this is the time to use them. If you simply have good summer red tomatoes, this will be super tasty as well (it's what I had).

This recipe started from Kenji's recipe on Serious Eats for a classic Panzanella salad, but as most things, evolved a bit. 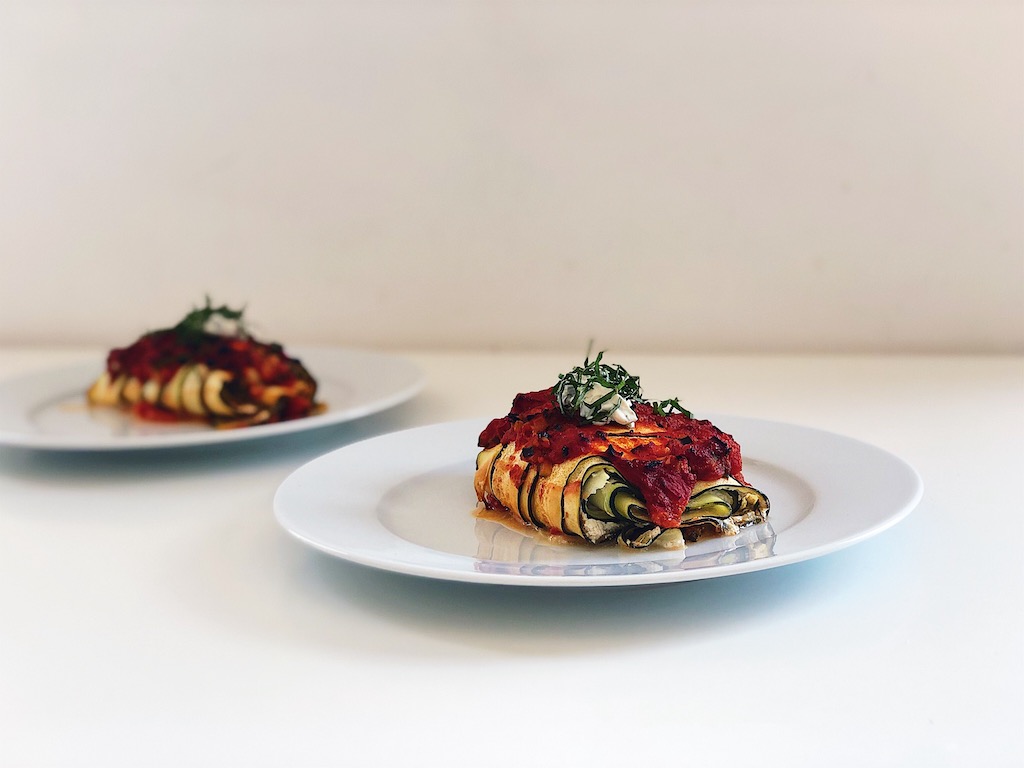 When it comes to personal habits, I'm seeing more and more that approaching change with an incremental and exploratory mindset suits me quite well.

I really like food (is that really surprising at this point) and part of the fun is it can feel like a low-stakes experiment, where at the end you get to eat it. Sounds pretty simple, but it's oddly quite a relief after a long day managing "stakeholders". I've been exploring ways to replace some of my favorite foods with some more plant-based versions. But not versions that give semblance to the original, but rather versions that can carry their own character and weight.

Many nut-based ricotta recipes online lean into the grainy aspect of ricotta by keeping the solids in the recipe. I couldn't seem to get over the fact that the ricotta I've had in Europe actually leans rather smooth and the grainyness of the almond solids jut didn't sit quite right.

In doing some research, I stumbled on a video for making ricotta, much in the same way, cows-milk ricotta is made - by curdling the milk and straining out the liquid. It kind of reminded me of those unhappy accidents of putting almond milk in coffee and seeing it curdle...it's like that but in a happy way.

And so then I was left with this incredibly creamy ricotta and was thinking of ways to use it up. I know zucchini is often seen as a low-carb pasta replacement, and yes, to some degree this dish is inspired by stuffed shells and my grandmother's cannelloni. But, I wouldn't think of this dish as a vegan-low carb version of a baked shells dish (although if that's what convinces you to make it, by all means justify it to yourself that way). I genuinely think it holds its own. Garlic, basil, and zucchini pair incredible well and that's where this dish was actually inspired from. I was thinking of ways to pair these ingredients and stumbled on these baked zucchini and almond ricotta rolls. 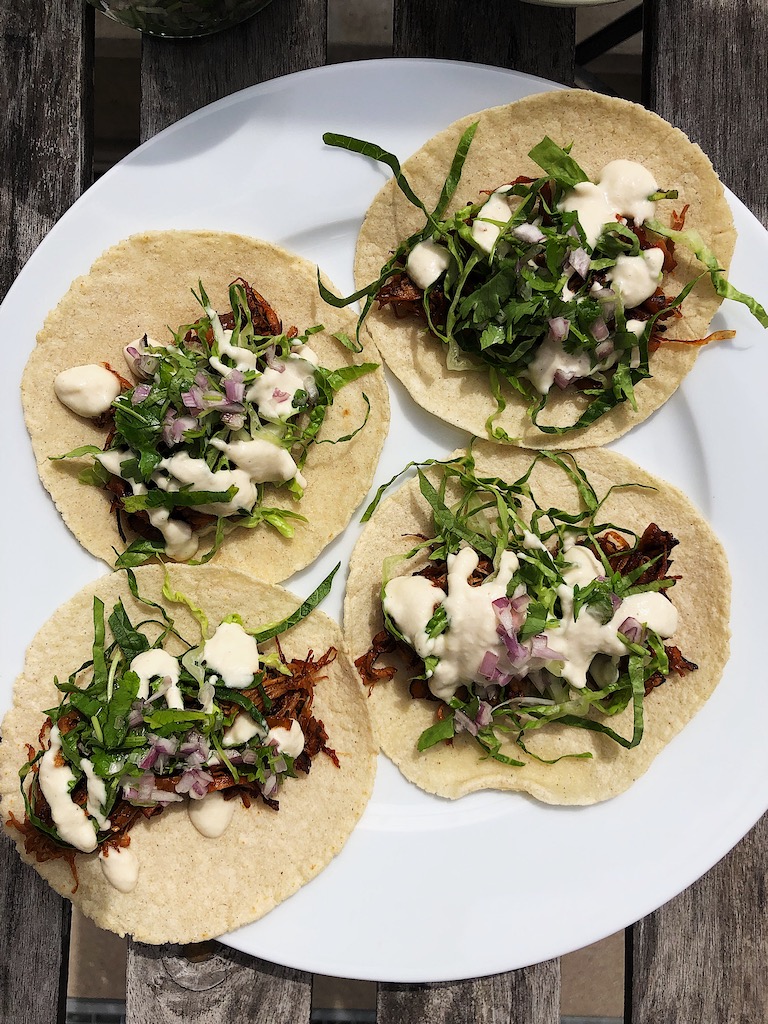 Living abroad oddly has me craving traditions that I never even celebrated back home. Taco Tuesday was something that went totally over my head back in the USA, but there's something oddly festive about this tradition that I'm leaning into hard.

Plus, my partner being from Mexico, it gives us the excuse to eat a little bite of home at least once a week. One of the challenges in this Taco Tuesday endeavor is to find a way to have spectacular tacos that are either vegan or vegetarian.

I've seen some recipes floating around the internet of using oyster mushrooms for a pulled pork or shredded chicken approach. After looking through a bunch of recipes, I landed on this mishmash. It's so unbelievably delicious. If you're cooking with other people, have one person shred the mushrooms while you do the other bits and you'll have dinner in no time. José said these were the best tacos he's had in Berlin. When I sent the recipe to a friend back home who is also from Mexico, she loved them so much she shared the recipe with her colleagues. These are worth making

Episode 10: Food as nostalgia past and present
After a break for su